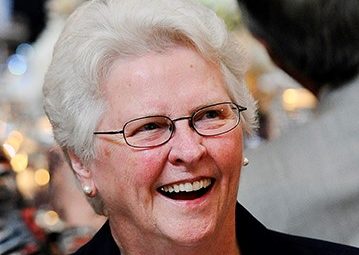 On July 25, 2019 Lillian Murphy, RSM Mercy Housing’s former President and CEO, passed away. The Mercy Housing Board of Trustees and many of our supporters and partners gathered to celebrate Sister Lillian’s life, career, and the incredible impact that she’s made on the lives of those in need. Sister Lillian’s motto when she began her journey as a Sister of Mercy was “peace,” and her legacy is exactly that.

Born in San Francisco, Lillian Murphy, RSM attended St. Peter’s School and began her ministry in the Burlingame Community as the bookkeeper for the College of Our Lady of Mercy, working in the office of St. Joseph’s Hospital, then in administration for St. Mary’s Hospital and Our Lady’s Home.

She became president and CEO of Mercy Housing in 1987. Under her leadership, Mercy Housing expanded from a small, regional housing development organization with 250 homes and 20 staff to a nationwide system that houses 42,000 residents and has 1,531 employees in 20 states. She was awarded an honorary Doctorate of Humane Letters by University of San Francisco School of Nursing in 1998. She retired from Mercy Housing in 2014. In 2015 she became a board member of Catholic Health Initiatives.

You can’t talk about Mercy Housing’s 38-year success without mentioning Sister Lillian. Her leadership grew the organization into 40 states, and she was named Housing Person of the Year by the National Housing Conference in 2011 and was inducted into the affordable housing hall of fame by Affordable Housing Finance.

As a member of Women Religious, she has always been a compassionate advocate for affordable housing, an astute business leader and an innovative problem solver. Her legacy left a lasting impact — inspiring us to not only alleviate the symptoms of housing issues but to go further and create concrete, scalable responses to the injustices that plague low-income families.

What’s prolific about Sister Lillian’s impact on Mercy Housing, and consequently the affordable housing industry, is the legacy of adaptability that persists today. She was the second Mercy Housing CEO, and the transition to Jane Graf as CEO in June of 2014 showed continuity of values, mission, and founding principles.

“I have been blessed to work alongside so many people in the challenging and dynamic mission that was established by the Sisters more than 38 years ago,” said Sister Lillian. “I have every confidence that Mercy Housing will continue to bring hope to those we serve for many years to come.”

Thanks to Sister Lillian’s compassion, Mercy Housing continues to be an award-winning, precedent-setting leader in providing low-income families, veterans, seniors, and people with special needs homes and resident services.

“Sister Lillian’s dedication made Mercy Housing one of the most respected and largest affordable housing developers, owners, and managers out there. She balanced fearlessness with pragmatism and got more done than anyone could’ve hoped. Her mission-driven work lives on in our organization today with a vision and core principles that guide every decision that we make as an organization. Perhaps most importantly, the foundation that Sister Lillian laid, made our resident-centered approach possible. Our leadership in Resident Services and co-locating housing and healthcare were made possible through her determination and resourcefulness.”—Jane Graf, Mercy Housing President & CEO

Sister Lillian’s dedication to peace transformed thousands of people’s lives. Please, join us in celebrating her legacy that created a world that’s more equitable and kinder.